1 RECON:
The universe is expanding, and so is humanity’s reach

Years after clean energy ended the world’s reliance on fossil fuels, a lull of peace encompasses all of humanity.

Lieutenant Commander Kyle Torres comes face to face with old friends, as he’s thrown into an assignment that could change everything: a reconnaissance mission with huge implications for humanity and science alike.

The recon ship, the Ichi, made contact with alien beings far from home, making new allies and new enemies.

Finding themselves in the middle of an alien conflict, inadvertently picking sides in exchange for advanced technology, the true cost of war is brought home to them in stark reality and loss of life.

Leaving Centauri for Earth, and unaware of the scale of power and technology they will need to secure the system and all the resources it holds, Admiral Dassiova’s fleet is in deeper water than they can imagine.

3 CONFLICT:
Battles have been lost. Enemies stranded. The Conflict continues

Re-armed, re-fitted and hopeful that they pack enough punch to take on the superior foe, the human fleet heads back to pit their new ships against the Va’alen swarm.

As they begin building a space station as a foothold in the region, their recon ship, the Ichi, is sent ahead to explore, when a worrying discovery leaves Commander Brandt and her team stranded and cut off on the surface of a strange and hostile moon.

Fighting against the clock, they face a danger the fleet might not survive, and treachery threatens everything they’ve built.

4 WAR:
The universe has expanded dangerously beyond belief

5 ALLIANCE:
The future of the galaxy will be shaped by one battle. An alliance is at the crux of Earth’s success

Captain Kyle Torres, now back in command of the Ichi, hand-picks his crew for their most dangerous mission yet.
Their journey takes them to never before explored sectors of space, and the secrets they uncover lead to an alliance with an unexpected ally.

A desperate assault uncovers truths humanity never expected in the bid to bring peace and prosperity to humanity, and to draw territory lines across space to last forever.

Get the epic military science fiction Expansion series today, with War, from the best-selling author of the hit Post-Apocalyptic series, After It Happened 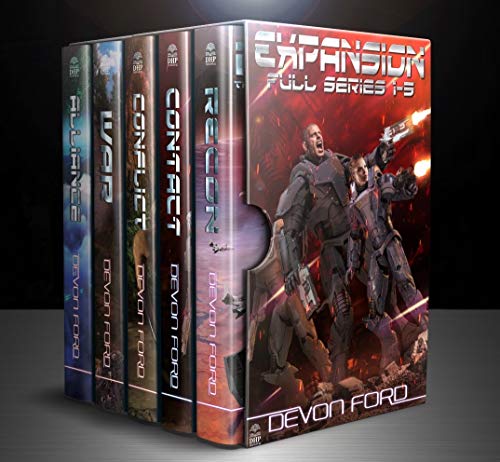