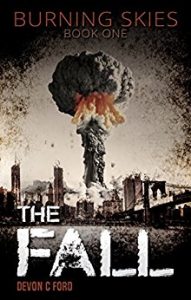 For starters, there are lots of different kinds of post-apocalyptic world we could find ourselves in. Imagine yourself a year down the line having to deal with a world without power, without running water, without transportation as there is no fuel left. Imagine yourself having to cope with the big three: food, shelter, water.

And not in that order, either.

Do you know how long you can go without water? Do you know how to purify rain water? Could you handle the extremes of seasonal weather changes where you live? How long will your food last, and do you know how to become self-sufficient? How much farm land does it take to feed one person? Are you even aware of the psychological effects of surviving in the first place?

And that’s just the first year in an apocalypse, without even considering what other people would do.

So why do so many people want to read about the end of the world as we know it? What is the obsession?

I think it’s a slightly sad side-effect of the society we have built, and make no mistake we have built it in every democratic country because we as the people have elected our leaders. People will always seek a release, an escape, a brain-break from the daily grind  where responsibility and paying bills and getting up before you want to only to go and work to make someone else more money than you get, is just the endless hamster-wheel cycle of life.

People want to switch that off, and they will do it in different ways. Exercise, alcohol, TV, books… all of these things are a way to push normal life aside for a moment.

Sometimes that switch off, that distraction, becomes a mild obsession. Many of us wish it could be exercise (he types, as he looks over his expanding midsection) but it worms its way into your thoughts so insidiously that you haven’t even noticed it’s there until you are hooked.

The apocalypse does that. You can’t say when or often how, but somewhere along the way you became hooked. It’s a believable world to escape to, where a person can reinvent themselves and be what they think they could be instead of what they have ended up as.

For many it remains as a mild obsession or an enjoyable escape, and allows them to imagine a world without phones and power, to see justice dispensed without the lengthy trial and predictably light sentence, to read about how people survive adversity.

Yes, I said that, people read about the apocalypse because of the feel-good-factor when the characters overcome adversity and survive. Despite the death and destruction and loss, a good Post-Apoc tale leaves the reader with that warm, fuzzy feeling that no Rom-Com could ever hope to match.

“But it’s just fiction…” I hear them cry.

Is it? Do any of us honestly believe that we as a species are so civilised and evolved that we couldn’t find ourselves in the midst of a global war? Or surviving in the aftermath of a nuclear Armageddon? Or picking up the pieces after a series of natural disasters or the next pandemic?

Take a look at history. We have killed billions of our own kind in our relatively short time on this rock. We’ve seen and perpetrated genocides, ethnic cleansings, slavery, forced labour, we’ve killed people through political uprisings, suffered famines, droughts, earthquakes, tsunamis, volcanic eruptions, floods, weather disasters… and all of this is before smallpox, Spanish flu, the Black Death, malaria, cholera, typhus, AIDS…

Wake up, peeps, we are probably due for something bad to go down.

Which brings me on to the people who already know this. ‘Prepping’ is nothing new on the far side of the pond to me, but it is still a relatively new concept over here. People are going on survival training weekends not just for fun, but so that they can provide for and protect their families when the SHTF. People, normal people with good jobs and no overt signs of lunacy, keep season-relevant BOB’s ready to go at all times. (A BOB, for those of you not up with the lingo, is a Bug-Out-Bag containing everything you need to survive for a few days.)

Talk of the apocalypse, in whatever form, isn’t as much a case of IF but WHEN.

But is it all doom and gloom? Well, that depends on your personal outlook on life. If you eat food that someone else has cooked every day and live your entire life through the inadequate medium of social media, then the apocalypse probably isn’t going to be your thing.

If you secretly yearn for the banks to disappear and for the need to survive to overtake the need to meet that next performance review on a strong footing, then you might not see it as such a bad thing.

The sad truth is, we don’t know how close we are every day to another war breaking out because our access to that information is as sanitised as it could be. We are spoon-fed the information that others deem us capable of handling, and we happily go on with our lives as though nothing is amiss on our happy planet.

But if we were aware, would we be as happy? Would we still be able to function in our daily lives? Could you imagine the conversations we would have?

“Have you seen the new Marvel film yet?”

“Forget that, did you see the display of military might by North Korea? Do you know where there are any shelters around here? And there was a report that an Ebola outbreak is making people reanimate and attack. Dude, it’s happening, I’m going off-grid!”

Those of you old enough to recall might remember the feeling that war between east and west was imminent for years. That heightened state of fear, public fear, has to have an effect on not just people, but society as a whole.

I’ve been asked if I prep, and I suppose I do in a way. No, I don’t have a stockpile of food and tools, because if an apocalypse of any form did happen I live in an area that is too populated to stay in. I don’t have a rural stronghold I could dig into like the proverbial Alabama tick, I don’t have six months of canned goods in my basement for the main reason that I don’t have a basement, so no, I’m no prepper.