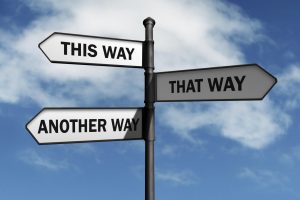 “An intersection of two or more roads”

Something we’ve all experienced, literally, and navigated both successfully and unsuccessfully. You go left, or right, or keep going straight (unless anyone has visited Milton Keynes) and you either drove or walked the right way, or you didn’t.

The literal meaning is a simplicity. Its factual, and mistakes are easily rectified by simple changes.

The metaphorical meaning of the crossroads is also something we’ve all encountered, but the options and routes aren’t always signposted. Often, we don’t even realise we’ve made that decision to go left when we should, in hindsight, have gone right.

So that poses the question: “Did I take the correct turn?”

Allow me, for now, to counter the question with another question. As well as negotiating literal and metaphorical crossroads, we’ve all experienced bad things in life to differing degrees. Some of these were chosen for us, but some were just the consequences of our decisions. Murphy’s Law. Sod’s Law. Newton’s 3rd Law of physics; that for every action there is an equal and opposite reaction. Just plain old bad luck. My train of thinking led me to backtrack and assess the bad things in my life; the damage that was done either as a result of my own decision-making process (which usually starts with a shrug and the mantra of, ‘Meh; what’s the worst that could happen?’) or just by the stars aligning to put me in the wrong place at the wrong time, and that made me realise something. So, the question I ask in response is…

“What is, or has ever been good, in your life… now, can you trace that back to a consequence of something bad happening?”

For me, it’s the butterfly effect writing a script more imaginative than anything I’ve read or watched. If something catastrophic, mentally or physically or financially, hadn’t happened, then would I be in the place I am now?

Would I have married the woman next to me (she’s oblivious to being the subject matter here, and I actually suspect she’s scouring ebay), or would I be on a different sofa, unhappy?

If I hadn’t experienced a massively dysfunctional upbringing, would I be able to empathise with people’s bad experiences and off or even the slight solace of understanding? If bad things hadn’t happened to me, would I be content now?

No, I probably wouldn’t.

But that doesn’t mean to say that the first few miles down any of those roads when I went left or right or straight on were all new, smooth tarmac…

Let me leave you with a handful of platitudes, just to prove that I don’t consider my words to be previously undiscovered wisdom.

Shit happens. Life’s a bitch. Suck it up, Buttercup. Every cloud has a silver lining.

Shit does happen sometimes, life can be a bitch, there are times when the only option is to suck it up and pretend to be ok, and occasionally clouds do have silver linings.

If you’re on a crappy, bumpy road now, believe that the next county spends more of their budget on resurfacing. If you think you’ve turned right when you should’ve gone left, ride it out – you may find a nice pub you’d never have discovered otherwise. If you were told you had to carry straight on but went left, who knows? Your future may lie in that direction and not follow the path that someone else gave you.